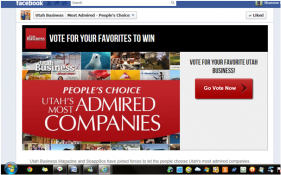 You can vote for your favorite Utah based companies and they will thank their loyal fans by giving away over $90,000 worth of prizes! All you have to do is click the link below, vote & win:

The contest began today at noon and will end on Thursday, May 31. Cast your votes today and win!