What are three adjectives that can be used to describe most employees at Oozle Media? How about ‘fit’, ‘competitive’, and/or ‘messy’? Yes, many of us have a habit of leaving a trail of destruction wherever we roam, which is one of the reasons we’ve decided to romp through the mud in OZone’s 2012 Dirty Dash Corporate Cup this June. 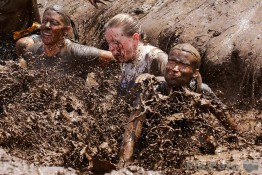 The Dirty Dash has become one of the most popular and fastest growing running events in the US. In 2011, it drew in over 30,000 participants and an equal number of spectators.

The Dirty Dash is a 5K mud-based obstacle course and includes climbing walls, mud pits, and something called The Pig Pen, Hog Wash, and Slop ‘N Slide. Corporate Cup participants will race against top Utah corporations for various team and individual titles, such as the Dirtiest Boss (in a “muddiest” kind of way of course), the Ugliest Tie, the Muddiest Suit or the Best Team Costume, which was awarded to Adobe in 2011.

Oozle’s costume strategy has yet to be decided, but we can assure that you won’t want to miss it! Employees will be split into two teams and each team will be lead by either Oozle’s CEO, Scott Linford, or President, Travis Ashby. Both Oozle execs have competed in triathlons and try to incorporate health and fitness into their busy schedules as often as possible. In fact, just recently, Utah Business declared Travis one of Utah’s Fittest Execs among top executives under the age of 50. 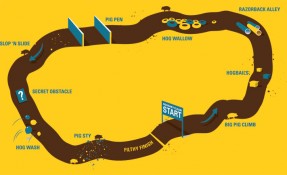 “We have the potential to win this competition,” Travis Ashby said recently. As a fitness leader, Travis is excited for the chance to lead his team to victory, but of course both Scott and Travis know it isn’t all about winning.

“Participating in the Dirty Dash is a way for us to create a sense of unity among all our employees and promote health and wellness by example. It also allows us to just get out of the office and connect with business leaders, employees, and other members of our community in a unique and fun way,” explained Scott.

The Dirty Dash has become one of the most popular and fastest growing running events in the US. In 2011, it drew in over 30,000 participants and an equal number of spectators. It was founded by Jeff Harps in 2010 and the idea behind the race, according to Harps, is to find communities with appreciation for running but take it further by catering to the people who don’t normally run or even exercise.

We hope to see you in the mud but if not, give us a call so we can show you why we’re the #1 Web Design Firm in Utah!