Lunch with Oozle Media: An Educational Experience for All

A Meeting of Minds

On Tuesday, March 27th, Utah internet marketing experts from Oozle Media and the Sandy Chamber held a luncheon to speak about some of the most important strategies to finding success in online marketing.

Some of the key topics under discussion included the importance of local search engine optimization, ways to take advantage of social media, and Oozle Media’s new “Refer-a-Friend” app. After the talks, a Q&A was held in which the speakers addressed questions from the audience. 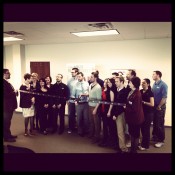 The topics of discussion during the event included:
The importance of first impressions – Guest speaker Rob Thatcher of SalesComm spoke about how to handle incoming calls. He warned that the emphasis should be on discussing the customer’s problem and setting up a face-to-face appointment, not on selling the company.
• Search engine optimization – Dave Smith, SEO Director at Oozle, spoke about the important and ever-evolving process of local search engine optimization. In its review of the event, Utah Business Magazine summarizes one of the key takeaways from Smith’s talk: “By making sure the business is found in regional results online when people are searching for a product or service, a company already has a leg up on the competition.”
• The Refer-a-Friend App – Scott Linford, Oozle’s President, spoke about the Refer-a-Friend App. This new Oozle-designed online app is “designed to identify, reward, and generate new ‘brand advocate’ for businesses of all sizes and industries.” Word-of-mouth generates more sales than any other technique, and the Refer-a-Friend App seeks to promote customer reviews and business advocacy.
• Social Media – Oozle’s CEO, Travis Ashby, spoke on the importance of social media in increasing exposure and referrals for your business. 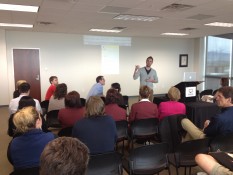 The lunch was an enlightening and educational event for all, as business owners and employees from local companies learned how to effectively expand their presence on the web.

About Oozle Media
Oozle Media is an internet marketing firm that offers many services including search engine optimization, web development and design, and call tracking. They are new members of the Sandy Chamber, and in the last year they have been the recipient of a number of prestigious awards and rankings including listings as an Emerging Eight Company by Utah Business Magazine and three rankings in UBN’s 2001 Book of Lists, which ranks over 1,500 Utah businesses in various categories. 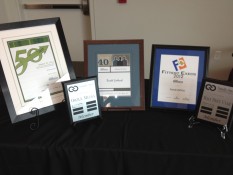 Oozle Media has won a variety of well deserved awards over the last year.