Listen, there’s no reason to keep shouting at your employees for their “incompetence” or “lack of passion.”

They’re not to blame for your business setbacks, especially if you aren’t monitoring what’s being said about your company in the social media arena.

A prime example of why social media monitoring is crucial for companies is the 2009 Domino’s Pizza scandal.  Here’s a quick recap:

The Domino’s Pizza scandal is unfortunate, but it didn’t have to get as nasty as it did. If you take one thing from this blog post let it be this: the key to successful social media monitoring is to respond immediately. By doing this you can turn a complaint into an opportunity, instead of a setback.  Here’s a perfect example:

What happened? On April 12th, Oozle’s Project Manager, Andrew Clark, decided to deviate from his usual routine and try Del Monte’s Very Cherry fruit cocktail (as opposed to their regular fruit cocktail).  He was hoping for a noticeable cherry influx, but was disappointed when he found only 7 cherries in his 14.5 oz. can. In his mind, 7 cherries did not constitute a “Very Cherry” experience. So, Andrew decided to tweet about it: 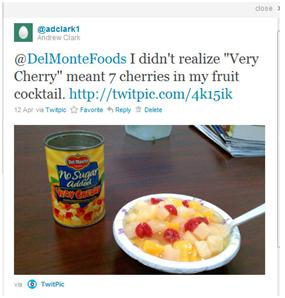 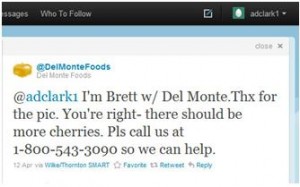 What was the result? Andrew called Brett and was given an apology on behalf of Del Monte for the dissatisfaction, and then was offered a handful of coupons in order to rectify the situation.  No, Del Monte didn’t promise to begin adding more cherries to their Very Cherry product, but this wasn’t necessary in order to maintain customer satisfaction.

I’m sure you get the point by now business owners, so I won’t reiterate it.  You can simply begin by monitoring all social media networks with any of the following tools: Bit.ly, SocialMention, Addict-o-matic, TweetReach or TweetStats. These tools work differently, but all will provide a way to identify whenever your brand is mentioned in various social media networks.

(We refrained from swearing here because we know how sensitive some of you are and we didn’t want to get red flagged by Google.)  We are your Utah social media experts.  GET OOZLED TODAY!