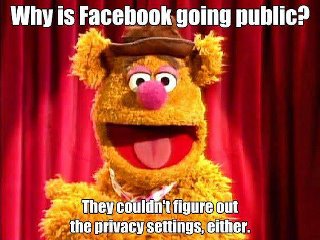 Facebook’s IPO happened just last week, which marks a big milestone. Now, anyone can own a little piece of Facebook – if they can pay the price. Facebook ended trading on IPO day with a share price of more than $38 and a market cap of $104 billion. Mark it: billion.

At this point in Facebook’s illustrious career, it seems wise to reflect: why the ridiculously pricy IPO? What makes Facebook just so worth it? What has Facebook done, exactly? A lot, it turns out. There are few aspects of our day-to-day lives that haven’t been touched by Facebook’s digital tendrils.

Here are just fifteen ways that Facebook has changed the way we live:

1. Usurped email as king. Facebook has supplanted email as the province of all personal conversations. Facebook’s layout gives the impression of being in a large room full of friends, as opposed the lonely, robotic feel of most email clients.
2. Changed sharing. Gone are the days when we discovered an awesome movie, song, book, or television show and had to email or – heaven forbid – call our friends to tell them about it. Now, recommending material is as simple as the click of a button.
3. Enabled single sign-on. Remember when you had a thousand logins for every website that required a membership? Facebook’s open graph has enabled users to maintain just one username and password and use them across multiple platforms.
4. Personalized advertising. There’s no longer any reason to be advertising your monster truck rally to teenage girls. Facebook has helped brands to target by age, location, interests, and more.
5. Given companies a new home on the web. Facebook is a warm, cozy place for most internet surfers. Facebook Pages have made it possible for companies to reach customers where they’re most comfortable, rather than asking them to go into the cold vastness of cyberspace to visit another website.
6. Ended searching in favor of discovering. We used to go to boutiques or record stores to find cool, quirky stuff, which fostered the experience of discovery. However, the Googlification of consumerism has made it so that we know what we want and go looking for it. Fortunately, Facebook has re-enabled the experience of discovery in more complicated ways, through recommendations from friends and other avenues.
7. Revolutionized politics. Before dropping out, Michelle Bachmann launched an ad campaign on Facebook that specifically targeted Christians and Tea Partiers, and Congressional representatives have started posting all of their votes on Facebook to help promote a higher level of transparency. There has also been no shortage of social media gaffes from politicians in the past few years, Anthony Wiener being the most obvious example.
8. Helped people engage in causes. Facebook groups are a powerful way to fire people up about humanitarian causes, from KONY 2012 to the Race to End Cancer, a Facebook Cause that raised $74,000 in the fight against cancer.
9. Blurred the line between aloneness and togetherness. A whole slew of complex psychological issues has come out Facebook’s explosion. One of the most obvious is the question of when we are truly alone. For better or for worse, we’re connected to our friends, whether at a crowded party or on top of a mountain surfing the web from a cell phone.
10. Blurred the line between public and private. When you’re logged into Facebook, the things that you like are publicly visible. In the digital age, as the fictionalized Sean Parker said, “private behavior is a relic of a time gone by.”
11. Empowered disenfranchised political groups. Perhaps no one is more aware of the power of Facebook than participants in the Arab Spring, Occupy Wall Street, and other social media-driven political revolutions.

Facebook has changed the way we live in a fundamental way, and it is here to stay. The only question is, are you taking full advantage? If you’re ready to harness the power of Utah social media marketing, then it’s time to GET OOZLED!